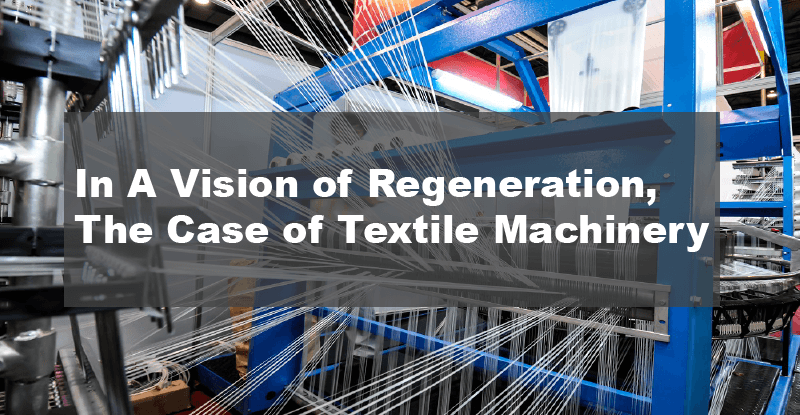 In A Vision of Regeneration, The Case of Textile Machinery

Posted at h in Machinery by 0 Comments
0 Likes

The textile industry was hard hit by the economic and health crises in 2020. Last year, global trading flows in outerwear dropped by almost 15% in euros. Compared to a drop of more than 15% in linen and hosiery. The drop in the second quarter of the year was huge, with some linen and hosiery goods down by nearly 50%. Furthermore, pre-pandemic trends were not restored by the end of the year. With a trend-based decline of 9% for underwear and 10% for the outer world in the fourth quarter of 2020. Many clothing industries use textile machinery.

The global health crisis that started last year has had a major impact on foreign trade trends. Many of the major industries that use textile machinery have been hard hit: the global trade in the textile and garment industry has been declining on a trend basis since the first quarter of 2020, ranging from -5 percent to -10 percent depending on the sector. The global demand for outerwear and home textiles dropped by more than 20 percentage points in the second quarter; silk, as well as yarns and fabrics, fell by 35 percent.

The subsequent quarters will see a steady rebound, but pre-pandemic peaks will not be reached by the end of 2020; the only exception is home textiles, which have shown exceptional durability, with pattern shifts in global demand near zero in the last two quarters of 2020.

Textile machinery is a source

After providing an overview of the textile and clothing sector in terms of production players and trade in the previous year. It’s especially important to investigate the connection between global demand for textile machinery. The sectors just discussed, or those who (directly or indirectly) use such machines.

The graph below shows the global demand for textile machinery and textile-clothing items over the last two years; the series is indexed, with the fourth quarter of 2019 at 100. (Not to have been affected by the severe effects of Covid-19 in the previous quarter).

In the time frame considered, the dynamics of the two curves are very similar. In 2019, there is a fluctuating trend, while in 2020, the first quarter begins with a sharp drop. And approaches a negative point in the second quarter. Textile machinery, on the other hand, has slowed the decline in comparison to more downstream industries.

The partial maintenance of textile machinery investment does not seem to be due to a desire to extend global production capability. But rather to increased competitiveness within the industry. To gain a competitive edge over competitors and prepare for the next global economic recovery. Apparel and garment industries would need to be able to use technological advances in capital products to promote product innovation or cost-cutting practices, based on their competitive positioning.