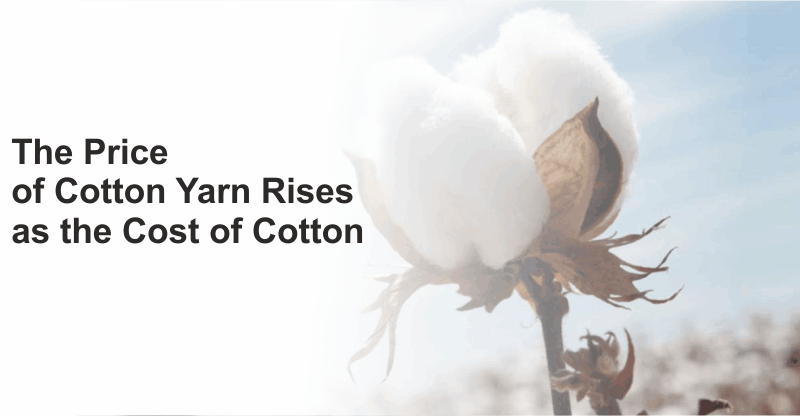 The Price of Cotton Yarn Rises as the Cost of Cotton

The sharp rise in raw material prices in recent months has emerged as a major problem in Tamil Nadu’s textile clusters. Which will go to the polls next month. Tamil Nadu, the country’s textile capital, employs nearly 60 lakh people directly. And has clusters throughout the textile value chain, including spinning, weaving, printing, and garment manufacturing. Cotton rates, which are the primary raw material for spinning mills. They are rising, which, according to spinners, has driven cotton yarn prices up. Prices have risen as a result of increased demand and uncertainty, they say.

Yarn rates have risen by ₹100 per kilogram in the last three or four months. Furthermore, there is no guarantee that the markets will stay constant. To keep cotton yarn prices down, the government should take at least temporary steps. Weaving is a labor-intensive company. Textile costs have already risen, according to a cloth manufacturer in Salem.

He adds that when the Central government declares relief measures after the lockdown, there was no separate package for textiles.

M. Varadarajan, a handloom weaver and general secretary of the Erode District handloom weaving employees union, says. “Yarn prices should be brought under check and weavers should get cotton yarn at reasonable prices.”

Handloom weavers also want the State government to issue orders for a free dhoti and saree system for the handloom industry. He went on to state, “It will keep us busy all year, and young people will remain in the weaving industry.”

Textile processors in Tiruppur claim they’ve appealed to all political parties to lower the GST on processing and turn the $200 million interest-free loan granted to sewage treatment plants into a grant.

According to a textile exporter in Tiruppur, increases in diesel and cotton yarn prices are likely to affect voting. Yarn rates have stayed steady over the last week after rising for nearly four months, and availability is becoming more consistent.

Tiruppur’s biggest demand to political parties, according to Raja M. Shanmugham, president of Tiruppur Exporters’ Association, is that they assist manufacturers in the development of housing for employees. Nearly 500 people work in a medium-sized textile exporting business. The government and industry should work together to create housing for these jobs. He claims that the majority of Tiruppur’s staff are from other districts or states and that they now live in dormitories and leased houses.

The abolition of the Market Committee cess has been a long-standing demand with the State government. According to the spinning mill operators. Textile mills are regulated by the state government in terms of energy, emission control, and labor. They claim that in order to attract capital, the mills need industry-friendly energy policies. Furthermore, because of government subsidies, cotton yarn manufacture in Gujarat, Telangana, and Andhra Pradesh is less expensive than cotton yarn produce in Tamil Nadu. They contend that Tamil Nadu should have policies in place to keep textile production competitive and draw investment.

The yarn price problem, according to Ashwin Chandran, chairman of the Southern India Mills Association. Should be discussed collectively by all stakeholders in the textile industry. He said the Association has applied to all of its affiliates not to raise rates anymore and to supply yarn at the agreed-upon price.

You can check out more details about Textile machinery here.